If you are like me, you enjoy astrological phenomena as well as being able to spot things in the night sky.  Oftentimes though, we need a little help being able to pick things out or know when they will be visible.  One of the really cool things that you can actually see with the naked eye from earth is the International Space Station.  It appears as a bright dot that moves across the night sky.  However, how do you know when its orbit will be visible or which direction or part of the sky you need to look in to be able to see it?

Well, if you have an Android smartphone, there is a really cool app in the Google Play market that does just that for you, all for FREE!  The app comes free with ISS alerts or countdowns on when you can see the ISS as well as an onscreen compass with needle that actually follows the ISS across the sky so it makes it much easier to pick out.  The app also tracks what is called “Iridium” flares which are calculated reflections of sunlight from satellites in orbit around the earth.  These appear as bright dots that fade in and then fade out, but are definitely pretty exciting to pick out and see with your eyes.  Take a look  at a screenshot of the app below: 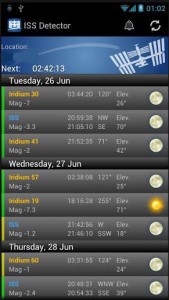 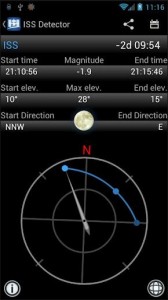 Again for free you get this really cool app that can help you see these really stunning objects in the night sky.  However, if you would like to add other famous objects or HAM radio satellites to the detector, you can pay $2.00 for each of those packs.

Another really handy feature of this app that is great is the ability to enter a range of hours that you do not want the detector to notify you of impending object viewing.  Let’s say an object is about to become visible at 3:00 in the morning, you may want to view it, however, if you are like me, there are hours that you probably don’t want to be notified.  This built in “quiet” setting in the app is a great addition.

This is a great app and one that anyone interested in meteorology or astronomy would be interested in.  Even if in general you don’t want to get deep into either of these disciplines, it is pretty exciting for most to be able to see the ISS from the ground using your smartphone.