Not only is there major functionality improvements with this release, it is also packed with many other additional improvements and functionality enhancements. The exciting thing about NAKIVO as a company and with the direction of their product is the blistering pace they are setting with regards to features and enhancements. They listen to their customers and the needs of those in the enterprise datacenter with regards to backup and replication functionality that may have been missing in previous releases.

We covered a pretty extensive walkthrough of the NAKIVO Backup & Replication v7.4 release in the beta form here with a walk through focusing on the Automated VM Failover and the Instant File Level Restore.

By now, if you have installed NAKIVO Backup and Replication in any of the past several major releases, the install of the virtual appliance is now famous for the quick installation time.  In fact in just about a minute of time, you can have the appliance deployed and booting for the first time!  As shown below also the installation options have been greatly expanded over the past few versions of NAKIVO Backup and Replication.  Now, even with the Virtual Appliance solution, you can choose the full solution, transporter, transporter with backup repository, or multi-tenant director.

Let’s take a look at the highlights of the NAKIVO Backup and Replication v.7.4 release.

Automated VM failover, especially in a DR scenario is extremely important. The last thing you want to have to manage and configure is basic network connectivity for virtual machines that are provisioned on the DR network once a site fails. The new Automated VM Failover functionality in NAKIVO Backup & Replication v7.4 allows for automatic re-IP functionality and network mapping. This means that NAKIVO takes care of virtual machine networking at both the VMware level and the guest operating system level.  This includes: 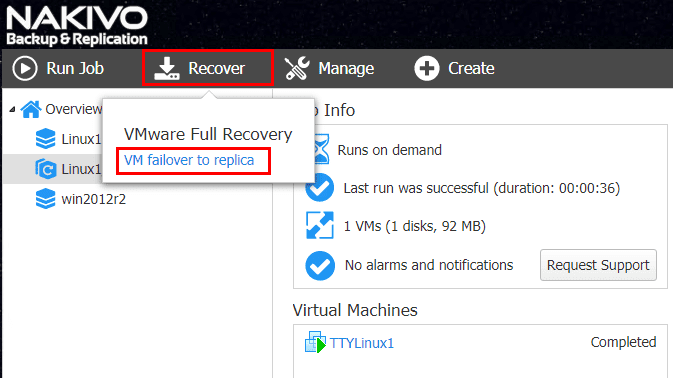 The New Failover Job Wizard for VMware wizard launches allowing you to configure and easily setup an automated failover job for quickly and efficiently failing over virtual machines to the replica VMs.

When dealing with File Level Restore operations or FLR, you want to be able to shortcut this process as quickly as possible. Previous to NAKIVO Backup & Replication v7.4, you had to either download the file or email the file to be restored to the server. However, with v7.4, you can now restore the file directly back to the server. This is typically the method that most will want to make use of when performing file level restores for servers. This shortcuts the process of having to first get the file to a jump box of sorts and then copying the file to the server for a restore.  The restore process si a simple (4) step process that can quickly recover data directly to the source server.

NAKIVO is constantly improving their AWS EC2 instance backup and has a strong offering in this space.  The configuration maximums have been extended for the recovery points per protected EC2 instance.  These can either be stored in cloud storage or in on-premise storage.  The external storage provides protection against AWS account issues where an administrator or organization may be unable to login to AWS for some reason such as if the credentials were compromised, etc.

A great new feature in this release is the ability to control bandwidth on any configured job.  This allows throttling network consumption by the job itself so that LAN and WAN bandwidth does not become overwhelmed due to backup, replication, and other job runs.

The new Global Search feature is a great new feature found within the NAKIVO Backup and Replication UI that allows for mass searching for objects including VMs, backups, replicas, jobs, groups, backup repositories, and transporters so that you can easily find what you are looking for.  Additionally, this serves as a powerful way to be proactive and perform operations as well on objects that are found.  Once you’ve found what you were looking for, you can take an action – add multiple unprotected VMs to a job, start a recovery, run a job, etc.

There are a couple of exciting Hyper-V feature enhancements with the NAKIVO Backup and Replication v7.4 release.  These include Instant VM Recovery for Hyper-V and Screenshot Verification for Hyper-V.  Both of these enhancements are certainly welcomed for Hyper-V environments.  The instant VM recovery feature allows booting Hyper-V VMs directly from the backup repository.  It simply requires choosing the VM, recovery point, and recovery location and the instant VM recovery can be processed.

The final enhancements in the list for this release include new SQL Server 2017 Log Truncation as well as Instant Object Recovery.  Also, new Built-in chat support enables chatting with a NAKIVO engineer right from the NAKIVO interface.

NAKIVO Backup and Replication v7.4 GA Released brings all the new features that were teased with the Beta release to general availability and into production systems. There are so many great new features to be considered with this release. In my opinion the Automated VM Failover and Instant File Recovery to Source are the two big items in this release. The other features and functionality are great new additions as well that will only serve to broaden the success NAKIVO is having in the data protection space. Do yourself a favor and download the latest trial version of NAKIVO Backup and Replication v7.4 and test it out in your own environment today.