There may be times when you need to update a storage driver in VMware ESXi if you are troubleshooting or ruling out hardware issues. Especially if you install the general ESXi install from VMware without any vendor customizations, it may install an older compatible driver for your hardware, such as LSI, for instance, that may not be the latest and greatest driver for your server, especially in the case of a whitebox type install.  Let’s look at how to find storage driver version update VMware ESXi. 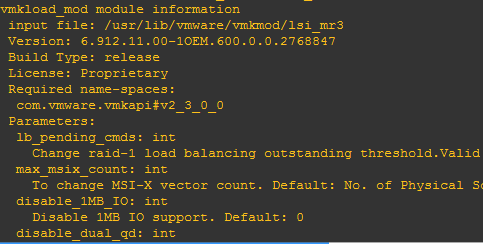 To see which driver your storage array(s) are using, run the following command:

After you have determined the storage driver being used, you can see which versions of drivers you are running by executing the following command and looking for the particular driver you found in the command above:

For LSI, which is now Avago, visit the avagotech website and search for the RAID controller model. You will find the latest driver available. Avago does this a bit differently however, in that the download from their site is literally a text file with the applicable links to VMware’s site containing the tested and verified driver for that particular card.

After you download the newest driver and the one matching your firmware and have uploaded this driver to the ESXi host or shared storage it can reach, to update the driver, you run the following command after placing the server in maintenance mode:

esxcli software vib update -v {VIB file} replacing the {VIB file} with the path to your driver you have uploaded. Reboot the server after the driver update.

To verify the driver that is now installed after the reboot:

The above example checks the version of the lsi_mr3 driver that the Avago 9380-4i card in my case was running.

Having correct drivers installed in ESXi can help to eliminate hardware issues down the road and it is best practice to update firmware and run the latest drivers for hardware.  To find storage driver version update VMware ESXi is not a difficult thing to do and with a few command line commands it is accomplished fairly quickly.