The answer to the question posed in the post title is – yes you can INSTALL ESXi on 4kn drives. However as I tested recently, the problem you will run into is being able to add a datastore. Let’s take a look at Can you install VMware ESXi on 4Kn drives.

Can you Install VMware ESXi on 4kn Drives

There is a really good KB article on VMware’s site that explains the sector size differences and specifications.  Take a look at that KB article here.  As mentioned in this KB:

What are 4K Native and 512e drives?
Industry standard disk drives have been using a native (physical) 512 bytes sector size. However, due to the increasing demand for larger capacities, the storage industry recently introduced new advanced formats that use 4KB (4096 bytes) physical sectors.

First, the sector size of virtual disks exposed to the Guest OS of virtual machines is still 512n. For some guest applications, such as MS Exchange, the guest will create an I/O workload that depends on what drive type is exposed to the guest. Since the guest continues to see a traditional 512 sector drive (512n), the guest OS does not make any attempt to generate 4KB-aligned I/O. This may result in non-optimal performance of Exchange workloads on top of 512e drives.
Second, internal I/O generated by ESXi is not 4KB-aligned and thus not optimized for 512e drives. For example, the VMFS snapshot file format is not optimized for 512e drives and can, in some cases, cause a severe negative performance impact. The same applies for VMFS locking and ATS (atomic-test-and-set) operations.
Virtual SAN is optimized for 4K aligned I/O operations since v.6.0, including the new vsanSparse snapshot format. However, 4Kn and 512e disk drives are not supported until ESXi is also modified to use 4Kn and 512e disk drives.

So that is their stance, but can you do it or what issues might you see during install or datastore creation?  Well, let me recap my recent experience with this.

First off, I didn’t have any issues with the ESXi install process and I used a partition created on a container using the 4Kn drives.  ESXi installed just fine, no errors, no weird performance anomalies with the OS boot, operation etc, besides one I will mention below.  This was a Dell 730XD server so I was using the Dell customized 6.0 U2 installer.  The hard drives are Dell branded Segate drives, model ST6000NM0014.

When getting to the datastore creation process however, this is when I started to see some weird things happen.  When creating the datastore using the 54 TB drive array using 4Kn drives, The datastore add storage wizard, took forever reading the current disk layout even though it was blank.  Also, the wizard finally just went blank, no really froze, but it was like it finished but there were no options available. 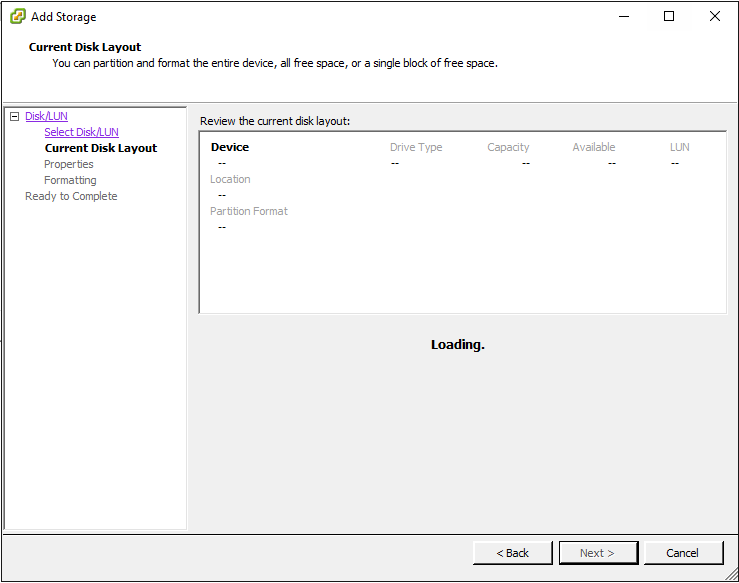 It sits and spins forever and then eventually throws the following error: 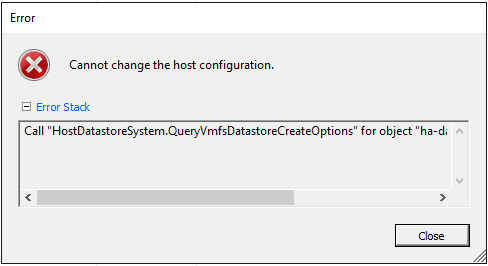 In running a partedUtil delete to try and manually delete the partition that was showing, it throws the error that the device has a logical sector size of 4096.

So far, I have not been able to get the datastore to create correctly.  I am trying some other command line tricks to see if the issue can be forced, but as of now, it looks like 4Kn drives are a no go.  So while the question of Can you Install VMware ESXi on 4kn Drives might technically be true, it isn’t really usable from what I can tell.  Will update this post on any findings.