After installing a test Meraki MS220-8 switch in my lab environment at home, I noticed when I remoted into my core switch for my lab, a Cisco SG300-20, it was displaying messages about a Native VLAN mismatch. I wanted to take a moment and describe why this message is important.  The Cisco Native VLAN mismatch basically is saying that you have a device plugged into your Cisco device that has a different native VLAN than your switch.

The following was seen on the Cisco switch by issuing a show log command:

In my case is wasn’t a big deal as I simply plugged my roughly unconfigured Meraki into my Cisco switch and didn’t have any devices plugged into the Meraki.  Chaning the native VLAN on the Meraki is easy enough.  Simply login to your cloud console and edit your switch port(s). 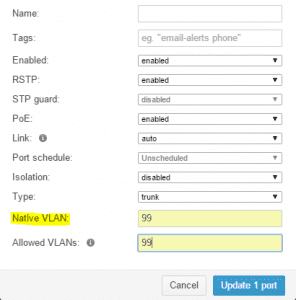 As you can see above you simply edit the “Native VLAN” field to match up with your upstream Cisco switch that is complaining about the VLAN mismatch.  After editing and saving the configuration on the Meraki switch, I no longer received the VLAN mismatch error on the Cisco switch.