Sophos UTM has plenty of features to protect your network, home network, or lab.  Most likely if you are like me you are running multiple VLANs in your environment.  If you want these VLANs/subnets to also have Internet access, there are a few things that you need to do besides simply creating the VLAN in Sophos (if using subinterfaces) and routes.  These additional steps include the following:

Let’s take these steps one by one. 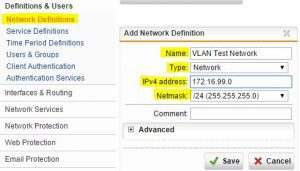 Now we have the network named and defined for easy usage anywhere in the system.

Next, we need to allow DNS access to our new VLAN network that we have defined.  To do this we navigate to Network Services >> DNS.  Hit the little folder icon to select your network you defined in the step above.  In my case – VLAN Test Network.

To create a masquerade rule, you navigate to Network Protection >> NAT and hit the button “+ New Masquerading Rule…” which will allow you to plug in the network details.

Make sure to move the little green slider button to the “on” position once you create the masquerade rule as this activates the rule.

The last thing that we need to do is allow the new network access to TCP ports 80 and 443 for web browsing.  In Sophos there is a builtin network service definition called Web Surfing that allows these ports so we don’t have to reinvent the wheel here.  Navigate to Network Protection >> Firewall  and then choose “+ New Rule…” button. 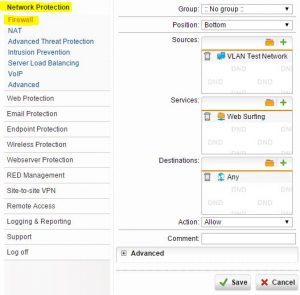 Choose the Sources as your newly defined VLAN network, services as Web Surfing and finally the destinations as Any.  Again, make sure the rule is activated with the green slider button.

Inter vlan routing – Add route back to your VLAN network

If you are not using subinterfaces in your Sophos UTM and you are using inter vlan routing on a downstream switch, you need to add a route back to your switch that is handling the routing for your VLANs. 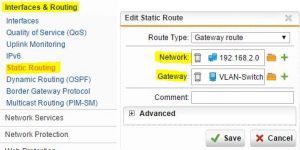 Note above – a network object has been added for the VLAN network.  The Gateway object is named VLAN-Switch in this case and is simply the IP address of the switch handling inter vlan routing.  Also of importance, the Gateway address defined here is the address that is on the same network as the Sophos UTM box, not the IP assigned to the VLAN you are routing on the switch.  If you use the IP Address of the VLAN Gateway on the switch, Sophos won’t be able to deliver traffic as it doesn’t know how to get there.

Once you have performed these 4 steps, you will have allowed Internet connectivity to your newly defined VLAN network.  If you still find that you don’t have Internet connectivity, make sure that you have properly defined a route back to your VLAN network if you are doing inter vlan routing at a switch level and not handling it at the Sophos box.  Also, extremely valuable in troubleshooting are the live log views found in the network protection modules and elsewhere to make sure your firewall isn’t denying traffic or to make sure you didn’t miss a step.