Recently, when working with Nginx, I wanted to export out the details of my Nginx build so I could see all modules the webserver was compiled with.  However, each time I tried to redirect the output of the nginx -V command, the linux redirected output not showing in the file.  I would see the command output on the screen, the file I was redirecting to was created, but nothing was being added to the file.  The command I was using was:  nginx -V >> output.txt

The terminal never complained about syntax issues with the command, however, just wasn’t appending any data to the file.  After a search session on Google, I found the error of my ways.  The command needed to be structured:  nginx -V &> output.txt

Take a look at the screenshot below for the results of the command that was executed and redirected properly.  Notice that we get only the command and returned back to a terminal prompt. 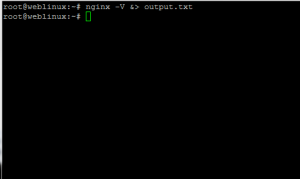