After recently purchasing Samsung’s new flagship smartphone the Galaxy S4, I have had a weird issue with some of my beloved weather widgets not updating.  I had tried several different ones and after a period of time, the widget would stop updating or responding to the manual update input from touching the widget.  I could delete the widget from the screen and then readd it back, however, this did not resolve the issue.  The only thing that seemed to work was restarting the phone.  Well, I knew there had to be some type of culprit to blame for this behavior.

My hunch about Samsung’s Touchwiz interface proved to be true when I decided instead of restarting the phone to instead restart the Touchwiz application.  After running a force stop on Touchwiz, my widget once again started responding to input AND updating.  Take a look at the “how-to” shots below. 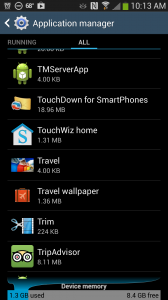 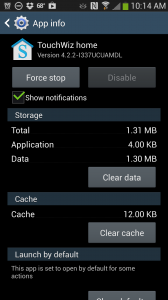 After killing TouchWiz and then the system firing it back off, the widgets started to work again.  I am not sure as of yet whether or not this is something an update from ATT/Samsung will fix, or if the app writers need to update code for the SGS4.  We will keep everyone posted here.  Check back for an update.

Update After finding that the issue above keeps happening with all weather widgets I placed on home screen, I tried three of the big launcher replacements (Go Launcher, Nova Launcher, and Apex).  NONE of the 3rd party launchers have this issue and widgets update perfectly.  IMHO, this should be addressed by Samsung and carriers ASAP.

Also, a forum topic has been opened up for everyone to post comments, suggestions, about this issue here:  https://www.virtualizationhowto.com/forums/topic/problems-updating-widgets/