There are certainly some exciting features included with version 3.1 of ReFS found in Windows Server 2016.  Included among those are the following.

Integrity-streams – ReFS uses checksums for metadata and optionally for file data, it can detect corruptions. This includes storage spaces integrations where it can automatically repair detected corruptions.
Data integrity scrubber proactively corrects errors. This periodically scans the volume and identifies corruptions and triggers a repair of the volume.

Real-time tier optimization – On Storage Spaces Direct, this not only tweaks capacity but also delivers high performance to your workloads. This includes creating tiers for your data to live on both for hot data and cold data. Hot data would be data that needs fast storage and cold data that is a capacity tier. So the data gets written to the hot tier first and then moved over to the capacity tier.

When to use Windows Server 2016 ReFS

Virtualization of course here benefits tremendously.  With the block cloning technology built-in and the point files being able to reference existing blocks without data moving, this can add tremendous speed for virtual machines and operations with VMs like Hyper-V checkpoints.  The quick zeroing out feature with the sparse VDL as well can greatly speed up the time it takes to provision “thick” provisioned eager zero disks.

When thinking about the possibilities of the block cloning technology built in, with many of today’s modern backup solutions that perform synthetic full backup operations, they can now utilize the block cloning feature to not move data during these operations but rather place pointer files to reference the blocks needed for the synthetic operation.  Companies like Veeam who have touted in their latest version of the Backup & Replication product to take advantage of this technology say they have achieved 10x the speed on a synthetic full backup.

Microsoft has made mention that Microsoft Exchange Server can take advantage of the enhanced scalability of ReFS.  Their comment here:

For example, Exchange and SQL Server AlwaysOn both introduce their own concepts of resiliency and availability suited for their specific workloads, and they can leverage the scalability offered in ReFS.

Microsoft also mentions that SQL Server Always On Groups can also benefit from this scalability aspect of ReFS.

When Not to Use Windows Server 2016 ReFS

While ReFS is certainly an awesome file system with tremendous benefits over NTFS in many areas, there are cases when we don’t want to or simply can’t use ReFS as the file system.  These include the following more notable ones.

Boot Drives – You cannot format a boot volume as ReFS.  As you can see below from the screenclips of Windows Server 2016 installation, there is no option to format in ReFS.  If you click Format you simply get the notice about data loss – no option of file system mentioned. 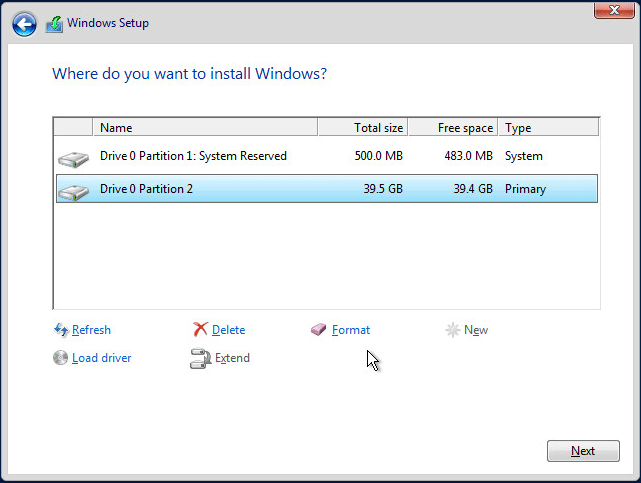 Deduplication – If you want to use deduplication, you cannot use ReFS.  Update Deduplication support has been added to ReFS in Windows Server 2019.

File Encryption – If file level encryption is important to you, ReFS cannot do file encryption.  Note you can do BitLocker encryption with ReFS, however, this is whole volume encryption and not at the file level.

Short Names – If you have an application or other use case that you need short file names, this is not supported with ReFS.

Disk Quotas – Disk Quotas are not supported with ReFS.  If you need to enforce quotas on a Windows Server 2016 file server you will need to stick with NTFS for now.

When we think about when to use Windows Server 2016 ReFS, there are certainly some really great use cases to the new file system technology.  Especially in the areas of virtualization and backup technology, there are huge speed and performance increases by utilizing the block cloning and other technology built into Windows Server 2016 ReFS.  However, if you have other needs such as file encryption, short file names, disk quotas and a few others, you need to stick with NTFS for now.