I put together just a few notes after going through a recent project of an upgrade firmware Equallogic multiple member group.  Essentially the process is the same as upgrading a single member, except that you need to pay a bit more attention to details of what member you are connected to and which one you upgrade first.  Let’s take a look at how to do this. 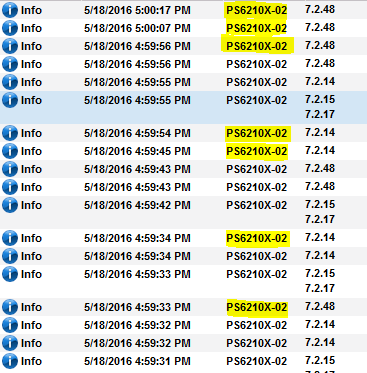 So we want to start with the other member besides the owner of the group.  So starting with that member, we FTP the update file for the new firmware to the array.  There are a variety of means to do that – Windows explorer, FTP via command line, or using a 3rd party utility of your choosing to FTP the file across.  Make sure you FTP your file to the member IP address of the member that is not the owner.  Also, don’t FTP it to the group IP either.  As you can see below we have copied the update file to the array.

Now we simply type the command update.  After doing so, you will be prompted to confirm.

After verifying the integrity of the kit and firmware versions, you will get another prompt asking if you want to proceed.

Now we issue the restart command to appy the firmware and bounce the controllers.

After the controller restarts and the other takes over you will most likely get disconnected from the SSH session.

Once you reestablish communication with your client, you can issue the command show member command and see the firmware version after the update.  You should see that the owner array still has the older version of the software.

After you update the non-owner array and verify the version, follow the same process to update the group owner array.

Once you get both arrays updated, you can issue the show member command and verify that both arrays have the same version of firmware.

As you can see above, both arrays have the same version of firmware now – V8.1.3.

The upgrade firmware Equallogic multiple member group project need not be a difficult one.  Using the process above, you should be able to upgrade a multi member group in an Equallogic group.  Most of all it just requires paying attention to which IPs you are connecting to and doing the group owner last.