You may have encountered an issue with installing .NET framework feature in Windows 8 or 8.1 where the installer simply fails with the error 0x800f0906 which alludes to a problem with an Internet connection however it could be WSUS related as well as we describe below.

In order to install .NET framework 3.5 without an Internet Connection, you need to have access to the Windows 8 or 8.1 media depending on which version is being ran.  Once you have the media mounted on the workstation, use the following command to install .NET at an elevated command prompt replacing the drive letter for the source with the drive letter of the optical media on the workstation: 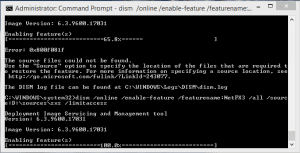