Evernote is just an all around great utility for anyone wanting to keep track of thoughts, notes, pictures, or other tidbits that they simply don’t want to forget or lose track of.  The interface is very clean and the apps for Android and Apple devices are top notch and provide a great user experience and ease of navigation.  One feature that has been sorely missing from the interface however is the ability to highlight within a note.

It is surprising that Evernote has not included the ability to highlight text within notes as this is a basic function of most good text editors.  We wanted to put together a quick post however, of a couple of ways you can create notes with highlighting in Evernote – by using Evernote Clearly, and by highlighting text within Word and pasting it into Evernote.

If you want to highlight text in a note that is taken from a website or page, Evernote makes a separate browser add-on for Google Chrome and Mozilla Firefox called “Evernote Clearly” that has the primary purpose of making cluttered webpages more “Evernotable” by stripping out all the unnecessary pictures, ads, bars, and such that clutter most websites these days.  It does a great job of this.  However, one of the really cool features of the Evernote Clearly product is that it has the ability to highlight text once you push the Clearly button.

The below example is taken from installing the add on into Chrome.  Once you install it, you will see what looks like a “lampstand” in the corner to the right of the address bar.

When you click the lampstand, it will take you to a much cleaner representation of the webpage you are looking at.  Over to the right, you will see the Evernote Clearly toolbar.  If you hover over the third button down, you will see the ability to highlight.

Once your selection is made, the note is automatically created and you will have a new note with highlighted text appearing in your Evernote application. 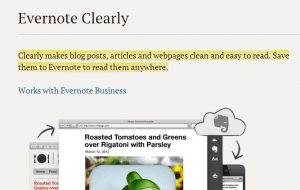 To confirm this, take a look at a screen clip which shows the note that has been created within the Windows Evernote application.  You can clearly see the text is highlighted.

Pasting from Word or another editor

Also, by using another text editor to highlight, you are not limited to web content as you are by using the Evernote Clearly application which only clips web content.

Hopefully the powers at Evernote will take notice of this glaring lack of functionality that MANY end users would like to see included in a future revision of the product.  It isn’t a MAJOR functionality feature that is being requested here, simply a standard feature that most note and text editors have included for years.  Evernote is such a great product in many other ways so we would hate to see simple feature requests like this create a road block to future success with the product.  Evernote, please, for the sake of your product, include HIGHLIGHTING!