Have you ever been looking for documentation that you just know you wrote down, a license key or important URL that you saved into a notepad document somewhere, or a phone number you scribbled onto a sheet of paper and couldn’t find it?  Well, you are not alone among your fellow IT’ers in committing this folly.  IT Pros usually have use for large quantities of documentation and notes.  It is part of the nature of the beast.  If you haven’t discovered it already, there is a great little application that can help you stay organized with your notes and have access to these notes virtually anywhere.  The app is called Evernote and is a free application that provides a centralized location to store all kinds of notes including text, voice, pictures and more.

I have been using Evernote for quite a while now and I can say that it has been a great tool for use with my IT related tasks and documentation.  It is really nice to have everything in a central location and have the same information available from my workstation to the Blackberry.  The beauty of Evernote among other things is the fact that everything is synced to your account which is in the cloud.  So any notes that you create on your workstation are available to your other devices and so on.  How many times have you possibly been at a remote office and remembered you had written down the resolution to an issue back at the office?  With this app all of those logistical issues are solved in taking down your notes and having those available to you at any location.

Evernote comes in a couple of varieties – Free and Premium.  While you can operate Evernote as I have in the completely free version, there are a few carrots that make the Premium version appealing including expanded limits on uploads, from 60MB/mo with the free version to 1GB/mo with the Premium version.  Premium also allows for searchable scanned PDF documents as well as uploads of all file types including Word documents and others.

The install for Evernote is very painless: 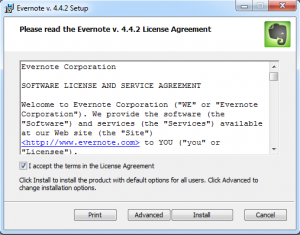 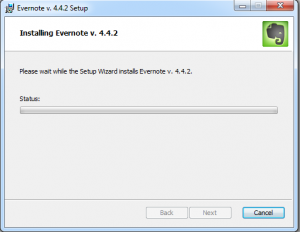 Evernote allows the creation of notes using text, snapping pictures and creating notes that way, or recording audio.  User defined lists with checkboxes can also be created and referenced using the Format menu.  Another couple of features that I noticed and really liked was the fact that this also integrates into Outlook for easy creation of notes from corporate email as well as integrates into the Windows API for sending various snags from Internet Explorer directly to Evernote.  There are also plugins that can be installed which allows for this same functionality within Firefox as well as Google Chrome.

The user interface to Evernote is very intuitive and cleanly written.  It has a windows pane type setup with a “Notebooks” menu to organize all the notes, tags to tag the various notes, and attributes as well which are searchable.  The right hand side is the workspace area which lists the notes and then the editing area to create and edit the notes themselves.

At Computer-howto.com we are constantly on the lookout for apps and programs that make the lives of system administrators and other IT professionals easier.  Evernote is definitely one of those very useful applications that admins do well to add to their bag of tools.  The information we are confronted with on a daily basis is almost mind boggling and to have an application which makes harnessing and organizing this information is a must.