In the previous post it was mentioned about the various use cases that you can apply DNS level policies.  Among those including policies to ensure high availability, traffic management, but the one that caught my eye was filtering.  So we can filter DNS queries based on certain criteria.

A use case that came to mind for me was filtering traffic from a high risk subnet, such as a DMZ subnet range.  Most of the examples in Technet show filtering for reasons such as malware infection, etc and blocking these subnets entirely.  However, I wanted to do something more interesting – block only traffic from a risky subnet to a certain zone.

If I have a DMZ subnet that I want to allow to utilize an internal DNS server for certain records, but not see an entire internal zone that houses other resources that we do not want the DMZ range to have access to.  Or I may only want to use the DNS server for recursive queries and block any internal queries, can we do that with DNS policy?  Yes.

The first thing we have to do with Powershell is define our ClientSubnet that we want to identify for filtering.  We can do that with the add-dnsserverclientsubnet commandlet.  The following commandlet is intuitive – basically we define the name and the IP range for the clientsubnet parameter.

After adding the clientsubnet, we can now define the policy we want to invoke.  I have an internal DNS scope called cloud.local housing internal records.  I want to filter any queries coming from the DMZ range defined above from being able to pull name resolution for the cloud.local scope.  To do that, we create the policy using the add-dnsserverqueryresolutionpolicy commandlet.  We name the policy, define the zonename that we want to deny access to,

Now the policy is in place, let’s look at the behavior from a “DMZ” client.  If I run an nslookup now we see the following:

We see above, we now get a Query refused when trying to perform nslookup on our internal domain.  Also, notice in pinging a known host in the cloud.local domain, we don’t get an IP address, we only get a could not find host reply.

I was curious about the behavior of a DENY policy vs an IGNORE policy.  We easily see the difference in the nslookup reply.  The IGNORE action drops the request.  So on the client side, you see a timeout. 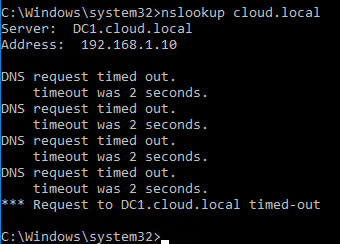 For a zone policy that we used above, you use the remove-DnsServerQueryResolutionPolicy commandlet.

With the new DNS policy functionality we can effectively use Windows Server 2016 DNS Policy Deny Subnet Access to Zone for this use case and many others that can be thought up.  This includes altering DNS responses based on time of day, client subnet, zone, high availability, and others.  The policy features with Windows Server 2016 DNS really add a new dimension in controlling DNS in the enterprise.