Nakivo Backup and Replication V7 Announced Adds Hyper-V Support – Nakivo who is known for rock solid and cutting edge VMware and Amazon EC2 backups has extended their offering to include Microsoft’s Hyper-V virtualization platform.  The Hyper-V backup capabilities use the same super easy, intuitive, and extremely quick web interface that we have become familiar with in Nakivo’s Backup and Replication product.  I have used many backup products over the years to protect virtual environments, and Nakivo’s product is one of the best that I have used.  The fact now that we can protect not only VMware and EC2 but also our Microsoft’s Hyper-V environments with NBR v7 certainly makes Nakivo one of the first choices in an all-around, capable, and versatile virtualization backup product.  Let’s take a look at some of the key highlights of the upcoming v7 release. 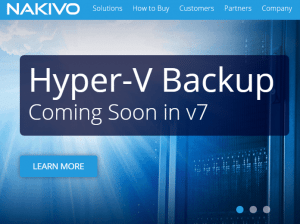 Check out the official Nakivo – What’s New in v7 page

How to get the Beta

Nakivo is offering a free Amazon gift card to those who check out the Beta of v7 and perform the following:

This is a great offer to try the new functionality.

Nakivo Backup and Replication V7 Announced Adds Hyper-V Support – This is a great step forward for Nakivo and provides the added flexibility and versatility to encompass Hyper-V environments or enterprises who have a mix of virtualization platforms.  So, be sure to check out the Beta when it is released.