I ran into a pesky issue yesterday when rolling through a slew of host updates in a few production clusters.  I had one host that presented with some odd issues during the update manager remediation phase.  After rebooting the particular host I received an error that you don’t want to see – Expecting 2 bootbanks found 0.  This was on an ESXi 6 host going from update 1 to update 2.

So from above, you know that I was trying to update a host in particular using update manager.  One odd thing that I saw with the host that was peculiar – it was on the same patch level as the other hosts in the cluster, however, it showed more updates that needed to be applied – hmmm.  I proceeded with the remediation wizard.  After kicking off the update, the update failed with the error:  esxupdate error code 15.  After looking at this VMware KB, I did discover that the /store looked corrupted somehow.  However, it was worse than that, the /altbootbank directory was also empty.  After taking a config backup of the host in question, I decided to see what happened when rebooting.

No dice!  After rebooting, I received the errors /bootbank and /altbootbank not found, hypervisor not found.  So this wasn’t good.  Instead of trying to troubleshoot the issues with the bootbank and altbootbank, I decided to just perform a fresh install of ESXi 6 and then restore my config.  This is where the issues started.

Each time I tried to perform a clean install of ESXi 6, I received the “expeciting 2 bootbanks found 0“. 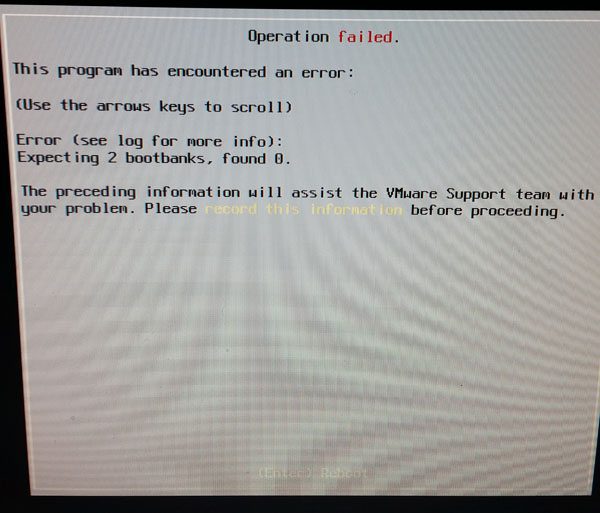 I had a couple of spare SDCARDs that I changed out into the box with issues and all the issues went away.  It seems as though there was a problem with one or both of the SDCARDs in the server causing the installer to fail.

If you happen to run into this issue and aren’t booting from a SAN, and nothing else seems to explain the issue, you may want to rule out a hardware issue with your boot device – in my case a pair of SDCARDs.