Since VMware Workstation 12 has all but eliminated the problems I was having with the VMware workstation console interfacing with my VMs, I have since moved back to using the console in the dual screen mode which is nice.  Before I had been using RDP connections to my VMs much like a “hyper-v’esque” solution which worked really well.  I simply used the builtin RDP device redirection to communicate with the printers on my host workstation.

However, since moving back to the VM console, I wanted to utilize the thinprint feature in my workstations.  There seems to be rather sparse all in one resources on how to enalbe thinprint in VMware Workstation 12, so I decided to write one!

The first thing that you need to do to configure the thinprint feature is to globally enable the feature within your VMware Workstation 12 preferences, found in the Edit Menu >> Preferences. 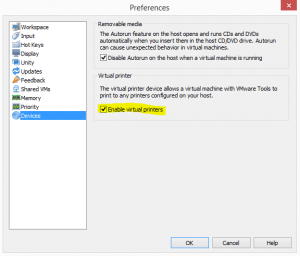 Simply select the above shown checkbox Enable virtual printers in your preferences.  After you have enabled the global option, you simply need to add the printer hardware device in your VM shown below: 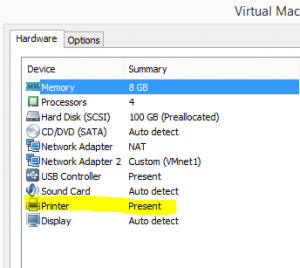 After you have added the printer to your VM hardware, simply boot your VM.  Where the confusion comes in and it did for me – when I booted my VM up I of course like anyone went to the printers console expecting to see all of my printers from my host workstation.  However, I didn’t see a particular Dell printer that I knew existed on my host workstation.  What gives?  What I did notice though was that I had a weird named printer that did look to be from a foreign source.  Notice how it is named #:2 on the end. 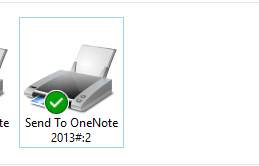 If I right-clicked on the printer and printer properties, I had all of the printers from the host stacked into one entry.  So instead of adding the printers individually, it presents all the printers as one virtual entry. 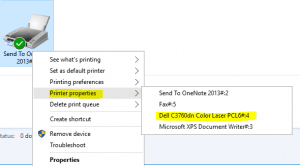 After launching Word, and trying to print, it indeed shows the entry for the Dell printer.  So the final step of the process is to verify that you have an entry from your host workstation that encompasses all of your printer hardware found on the host workstation.

The thinprint feature in Workstation 12 does work very well and is easy to setup.  However, it would be nice if the technology presented all the host workstation printers in a normal fashion where they are individually presented to the guest OS.