Today in working with a new virtual machine that was spun up with Windows Server 2012 R2 and SQL Server 2014, I was asked to troubleshoot an issue where distributed transactions were not working from this particular VM and other SQL servers and failing with the error OLE DB provider SQLNCLI11 for linked server unable to begin distributed transaction.  We knew that DTC was working correctly between the others server and not the new VM.  The other SQL boxes were old Windows 2003 Servers running SQL 2005.

However, in doing some digging into the configuration of DTC on the 2012/SQL2014 box, I found the default settings were not configured correctly to allow communication with the other servers.  Let me detail those settings that are configured out of the box for Windows Server 2012 R2 for Local DTC.  These configuration settings are found under the Component Services snapin which can be launched by typing dcomcnfg.msc at a run/command window. 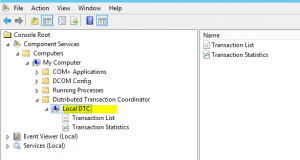 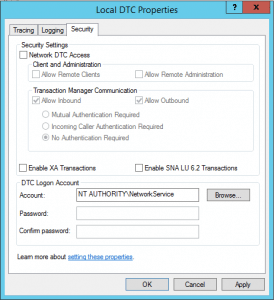 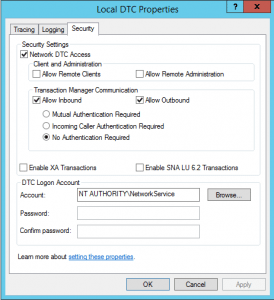 Also, in addition to the configuration above, you need to make sure that the Windows Firewall is set in the Allowed apps and features to allow Distributed Transaction Coordinator for at least Domain if you are in a domain environment.  Set the rules here according to your particular environment and network setup.

After setting up MSDTC and then also the Windows Firewall rules as they should be to allow the MSDTC traffic through, all the errors that we had previously with the distributed transactions in SQL code running on this test box went away.

The errors we saw ranged from:

The operation could not be performed because OLE DB provider “SQLNCLI11” for linked server was unable to begin a distributed transaction.