In working with a client recently in changing out the RAID controller battery on an MD3000i connected to a small VMware environment, I wanted to post the steps taken to get the batteries changed on both RAID controllers in the MD3000i which had gone bad along with pics of the process.

Disclaimer You should always call Dell or your manufacturer of any storage array in a production environment to make sure you do not lose data.  This post is for reference only and proper supervision and consulting should always be done before any maintenance on a production system.

In order to manage the MD3000i you need to have the Modular Disk Storage Manager (MDSM) installed on a management workstation or server to get in and manage the RAID controller modules on the unit.

In order to change out the RAID controller battery, you need to make sure that both paths or both RAID controller modules are cabled correctly and are at least healthy enough (besides the battery) to switch traffic over to.  Then we use the MDSM to take the problematic controller offline which will switch all processing of traffic to the other RAID controller by default. 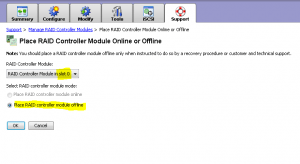 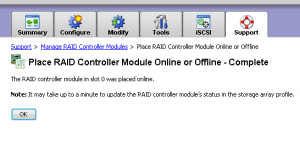 Removing the RAID module and changing out the battery 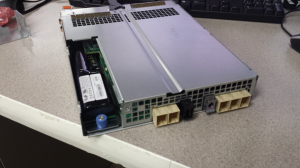 There are two screws that have to be removed from the battery cover plate.  After those are removed, the plate lifts open and you have a “thumb” screw on the battery module that has to be unscrewed at the end.  Once that is removed, the battery slides out. 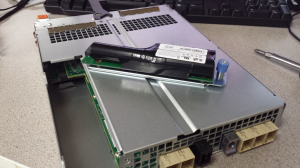 The pic below shows us screwing down the thumb screw after seating the new battery in the module. 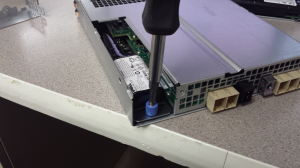 I apologize below, but the below pic was blurry as I had to snap this inside a server rack.  It is hard to tell but after reseating the RAID module, there are no activity lights on network ports because we still haven’t brought the controller back online. 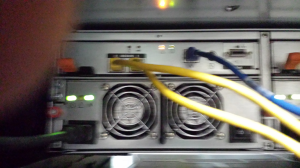 After bringing the controller back online in the same menu we took it offline (detailed above), we can go to the Tools menu and Reset Battery Age and see that the new battery is showing to be charging which is good. 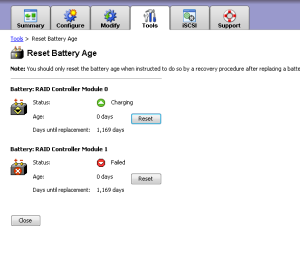 We can no manually set the “preferred path” to be the one we want in the Modify menu. 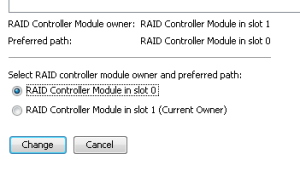 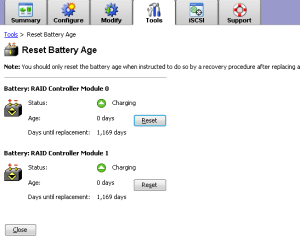 While the person changing out the battery needs to know what they are doing, the task really isn’t that difficult as long as you have good connectivity to your MD3000i with the management station software in place.  At that point most everything is plug and play with the batteries and just a matter of taking the controller you are working on offline and then bringing it back online.