For those administrators out there who have been using the Microsoft Automated Installation Kit, there are changes coming down the pipeline with the introduction of Windows 8 and Windows Server 2012 having to do with the automated installation kit.  There have been quite a number of changes in this version of deployment toolkit and some of the utilities that admins may be used to using in the Deployment Tools Command Prompt are deprecated not the least of these is the imagex utility. 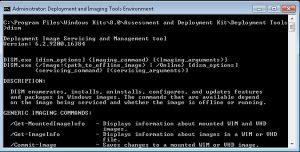 Microsoft is also good about deprecating names as well as the new kit that encompasses Windows 8 and Server 2012 is now called the Windows Assessment and Deployment Kit.

Also, the install of this new kit is quite a bit different than the older counterpart.  So far, it looks to only be web based.  You download a tiny installer (a little over a meg) and when launched it launches the web installer which allows you to choose which components you want to install (and download).

Hopefully, Microsoft may make an offline ISO available to use with the new WADK as it won’t be efficient for administrators to have to download the entire installer for every install.  We will have a more detailed look at the new utility in an upcoming post.