The easiest way to find out what version of Windows you are running on your computer at home or anywhere is to run the command winver at a run/search menu.

The command basically launches a windows dialog box that displays the Windows version.  One thing that is different between Windows XP and Windows 7 winver commands that I don’t like is that the memory amount is not displayed in the Windows 7 winver dialog box now.  This was very helpful to be able to see this information as well as the Windows version.  However, even with that said, the winver command is definitely the command to remember when wanting a quick and easy way to identify the Windows family as well as the version of that family.  Service pack information is also displayed in this information. 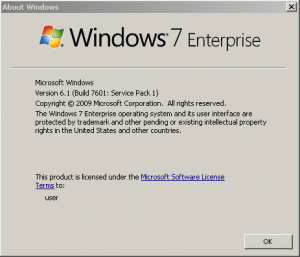