Most admins have been rolling along in their Exchange environments with 2010 SP1 for quite some time now. As Exchange admins are familiar, Microsoft releases rollup updates from time to time to address certain issues with code. As of late, the Microsoft Exchange team has had issues with rollups being released with code flaws that have introduced problems with the updates.  Rollup update 3 was release two times prior, but issues were found with the code in many environments among which was a bug that led to duplicate emails on Blackberries. However, rollup update 3 in its version 3 form seems to be stable and worthy. **Note Rollup 4 v2 is currently out, however  for the purposes of possible code irregularities, we decided to install rollup 3 v3.

The install was very painless and went smoothly on all servers. The CAS/HUB servers took the longest to update which was around 25 minutes apiece while the Mailbox servers only took around 10 minutes to update. Below are screenshots from the various stages of the installer.

As always, make sure you take the necessary precautions before updating any server in a production environment so as to prevent an easy day turning into a nightmare. Make sure you back up all data and possibly bare metal in case of the unexpected.

What the Rollup Update Addresses:

There following link is to the technet article which details the issues that rollup 3 addresses:

The installer appears to do quite a few things but the pieces that stood out were: 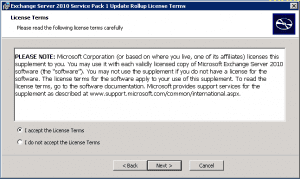 Setup generates required assemblies for the install (Note as the installer notifies, the Exchange services at this point are still functioning and answering requests until you choose to go forward when the assembly is finished) 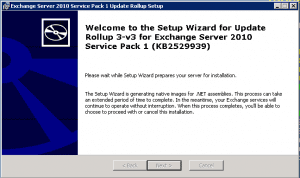 Assembly of the required files is finished, installer is ready to begin the install of rollup 3 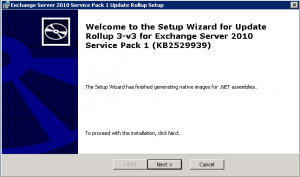 Install begins and services are stopped 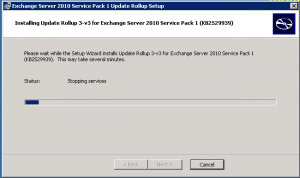 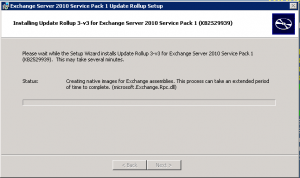 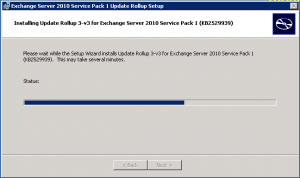 After several minutes, the installer completes 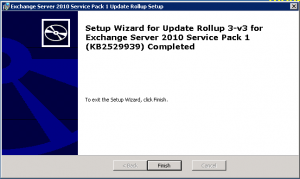 ***Note the only server in our environment here that we were asked to reboot was one of the mailbox servers. I am not sure if this one server had files that the installer recognized needed the reboot and thus prompted. However, 3 of the 4 servers simply completed the install and never prompted for a reboot.

The install went very smoothly without problem.  The only concerns we have had as of recently have been the removal of the rollup updates a few days after they have been released.  Hence, we decided to install the rollup update prior to the latest in the Exchange 2010 SP1 environment that had no rollups installed.  It is my feeling, that the Exchange team has encountered just some unfortunate “Uh ohs” as of recently and will most likely get things moving along smoothly again.  We would rather err on the side of caution though.  We will see how things go with the upcoming release of Rollup 5 due out anytime now.