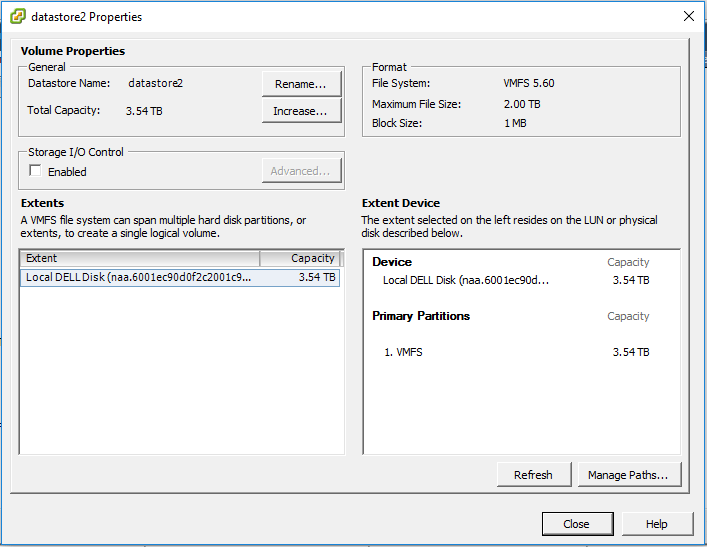 As we all know, the extremely large capacity drives that are being sold now are either 512e or 4kn drives.  If you want anything over around 6TB it seems that is the breaking point to go over to 512e or 4kn.  Up until vSphere 6.5, these drives were unsupported and you would have issues formatting your datastores with VMFS

They use what is called Advanced Format (AF) drives.  They use a large physical sector size of 4096 bytes.  Most importantly perhaps is the main reason behind this is the reliability improvements from moving to the larger physical sectors along with the size enhancements.  The ROI on these size and format drives are also beneficial as the price for the storage sizes are lower than traditional non advanced formatted drives.  the caveat here at least with the GA release of 6.5 is that it only supports 512e mode which means the 4k sectors emulate the 512 bytes for the drive.  However, before this was not supported and now is.  We can only expect the support to come along for the true 4k native formatting which no doubt will be in a future major update release if not a patch perhaps.

A requirement also for this support is the datastore is formatted with VMFS version 6.  This is the new VMFS version that has been released with vSphere 6.5.  Unfortunately, there is no upgrade of a VMFS 5 datastore to VMFS 6.  You have to reformat the drive or create a new datastore and move VMs over to the newly VMFS 6 formatted datastore.  We will take a look at this process in a future post.

If you want to read about the “P’s and Q’s” straight from VMware take a look at this KB.

It was inevitable to expect VMware ESXi 6.5  512e drives as this is the move in the industry for quite some time now and eventually we can expect 4k formatted drives to overtake the classic 512 byte formatted drives as the capacity and reliability improvements of 4k drives simply make sense along with the dollar price per gigabyte of the 4k drives makes them very attractive when looking at large capacity datastores.