Last week in working with a “whitebox” ESXi server running a VMware lab that was running on an LSI 9280-16i4E controller, the need arose to monitor LSI Megaraid storage controller in VMware and see an initialization process that was running as this was a freshly built server with ESXi 5.5 loaded.  The concept and process to install is very straightforward, however, I ran into a pesky issue with being able to resolve the host that had me scratching my head until an “ahah” moment hit which I will describe below.

To get your VMware ESXi server up and running so that MegRAID storage manager can properly see the LSI RAID controller, you have to install the SMIS component from LSI on the VMware host.  This is nothing more than a VIB file that gets installed on the host.  A reboot later, and you should be up and running.

If you go to the LSI website and support and downloads here:  https://www.lsi.com/support/pages/download-search.aspx  you will be able to search for your specific LSI RAID controller and then look for Latest SMIS Provider

Once you have the .zip file downloaded, you can extract and you should see contents similar to the below.  We are interested in the .vib file.

You will need to enable SSH on your host and then Simply use a program such as WinSCP to copy the .vib file to the /tmp directory or another directory of your choosing.  After you have copied the file in place on the host, you can issue the install command by the following syntax:

The part that wasn’t coming together for me in the environment was that after installing the .vib provider and rebooting the host, and then connecting via the MegaRAID storage manager, the server continued to show up as 127.0.0.1 in the MegaRAID storage manager connection window.  There are several blog posts out there mentioning the need to change your hosts file on the Windows machine, etc, etc.  However, after a lightbulb moment, I checked the DNS configuration of the ESXi host and no DNS servers were configured and the hostname was still set to localhost.  The problem with this is that there was no configuration at this point and when you clicked the 127.0.0.1 link which of course is your own loopback address, the login would always fail even though it was coming from the ESXi server as it was trying to authentication against the Windows host that MegaRAID storage manager was running on.

The MegaRAID Storage Manager software was simply passing along this hostname information to the software from the ESXi host.  Once I correctly configured the hostname properly and setup DNS on the host as well as made sure the A Records were in place, MegaRAID storage manager then correctly passed on the Host IP address.

So you need to navigate on the ESXi console to Configure Management Network and then DNS Configuration and make sure the proper values are populated here. 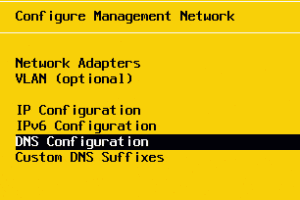 Having the MegaRAID Storage Manager software to manage your ESXi whitebox servers or any other hosts that are running LSI RAID controllers is a very nice thing to have for monitoring purposes.  The installation is rather painless aside from the host reboot to get the .vib in place.  The only pain that I ran into as mentioned above was the resolution issue in MegaRAID manager which was easy to resolve once pointed in the right direction.